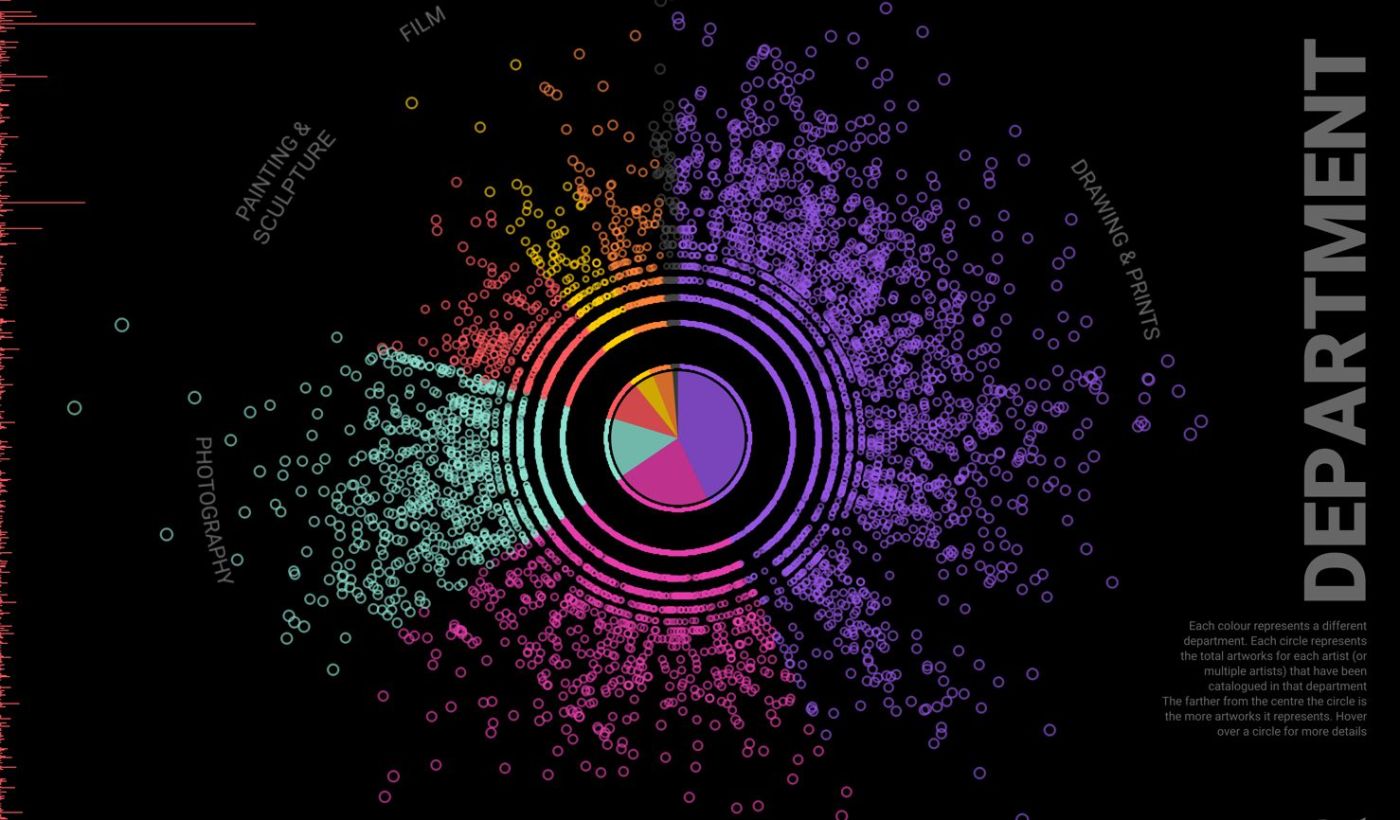 The Museum of Modern Art (MoMA), founded in 1929, has amassed one of the largest collections of modern art in the world. When I recently came across a dataset of MoMA’s catalogued collection, I thought it would be a great opportunity to build a more creative visualisation than what I usually work on, whilst also hopefully revealing some analytical insights.

Inspired by Sam Parson‘s recent blog post on combining Tableau with Illustrator to leverage the strengths of each tool, I was also interested to explore the possibilities in that area and for this visualisation I used Affinity Designer to create a few elements of the visualisation.

The complete MoMA collection contains almost 200 thousand artworks, however, not all of these are in the catalogued collection, which still contains about 139 thousand records. This comprehensive data source has many fields to explore and I decided to focus on the following areas:

For this section I plotted points for each artwork using the width and height fields (where they were populated) on the X and Y axes respectively. I then added drop lines for selected marks and enabled “Allow selection by category” in the tooltip. This allows you to hover over a point and then select the artist’s name in the tooltip to highlight the dimensions of all their works to see if their are patterns or similarities:

Unfortunately, the drop lines feature only works on Tableau Desktop, so on server it still highlights all the points but without the drop lines.

After selecting an artwork, the tooltip also contains a URL link at the bottom that takes you to the web page for that artwork on MoMA’s site.

MoMA has seven departments in its high level categorisation:

I decided to use a log scale here as there are some outliers and with a linear scale the chart (below) is not so clear or visually appealing:

To more clearly delineate the seven categories, I placed a small pie chart in the centre of the circle and added labels on a circular path around the edge.  This was one of the parts achieved using Affinity Designer, which has really nice functionality for aligning text on curves. These three layers were then placed on top of each other on the dashboard with the main radial chart on top so tooltips are accessible.

I started out with a regular stacked bar chart here, but wanted to bring it to life with a kind of pointillist effect (which I had tried recently on this visualisation). This allows the user to hover over any point to see the artists name but also shows the overall proportion of artists by gender:

This effect is achieved by adding the dimensions to the view representing the level of detail required – in this case the unique identifier for artists – then adding an Index calculation to the Columns shelf calculated along all dimensions and sorted by gender:

For this section I listed the nationalities of all artists in the collection in a table (split in two for ease of displaying) with the seven departments (categorisations of artworks) across the top. I then created a highlight table by colouring each cell based on the percentage of artwork by artists of each nationality for each department.

Using a percent of total enabled the colour scale to work despite artists of some nationalities having far more artworks in the collection than others. You can then hover over each cell to get a numerical breakdown of the number of artworks in each department by artists of that nationality:

MoMA had its first acquisitions of artworks in 1929 and has grown ever since up to almost 200 thousand pieces. Initially, I just showed the cumulative acquisitions at the top of the visualisation as part of the header, but then decided to try putting a chart of the daily acquisitions down the left side. This daily acquisitions charts is somewhat in the background and only becomes prominent on days where there were very large acquisitions.

The 6th October 1964 had the largest number of all on any given day, with 11,411 acquisitions recorded. Hovering over this single bar shows a breakdown of the top 20 artists by number of artworks acquired on that day:

Combining Tableau with other tools

Due to a few issues with importing elements (which I might write about separately) I only used Affinity Designer for two parts of the design: the title, to ensure the font rendered correctly, and for the circular text around the radial chart, which I couldn’t have done in Tableau but was fairly easy to create in Designer.

That said, I can definitely see the value of combining the analytical power of Tableau with the design/layout and other graphical capabilities of other tools – and many thanks to Sam Parsons for taking the time to discuss the possibilities and pros & cons on that front. I hope to explore this more in future visualisations.

Click on the image below to open an interactive version in Tableau Public: