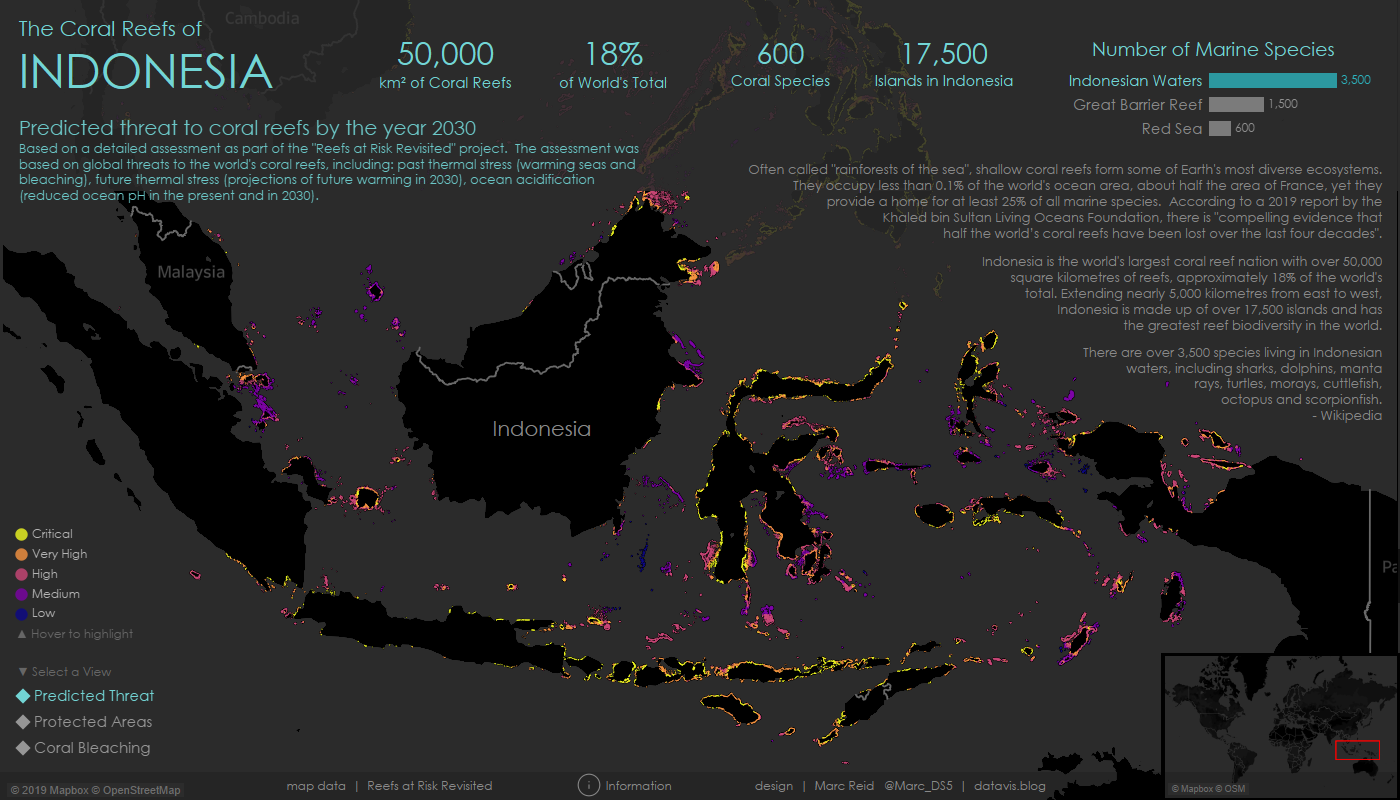 Indonesia is one of my favourite countries. In 2009 I was fortunate to spend 7 months travelling and living there, during which time I visited various islands and scuba dived and snorkelled in a number of locations. I’m no expert diver, but I can say the coral and marine life I saw around Indonesia was the most vibrant and varied I’ve ever seen.

The topic for this month’s IronQuest community project (organised by Sarah Bartlett) was “Sea Creatures” and, while I hadn’t planned to submit an entry due to other commitments, when the deadline was extended to 12 June, it gave me time to put a visualisation together and I thought this would be a good opportunity to take a look at some coral reef data for Indonesia. While coral reefs are not ‘sea creatures’ themselves, they do support a huge amount of marine wildlife, so they seemed an appropriate topic.

Due to the geographic nature of Indonesia, being spread out over some 17,500 islands spanning over 5,000 km from east to west, I was keen to represent the data in a map to be able to communicate a sense of the scale and geographic makeup of the country. From my initial searching, I found some shape files of predicted risk to coral reefs by the year 2030 from Reefs at Risk Revisited: Climate-Related Threats Data as well as some data on protected locations in the region and recordings of coral bleaching, both from Reef Base.

With these three data sets I made three map views in Tableau to show their respective data and then got to thinking about how to show them all on one dashboard. I’m not naturally drawn to building long-form / scrolling dashboards so instead opted to be able to switch between the different views using a sheet swap technique, which you can learn about in this blog post by Hashu Shenkar.

I’ll be the first to admit the dashboard is quite light on analysis as it’s mainly just presenting the source information to the viewer in a (hopefully) accessible format, so it’s more informational than analytical. But given the time I had I was OK with that and to supplement the key sources I added some background text on coral reefs from various online sources.

Finally in the “Information” popup window, accessed by clicking the “i” button in the footer, I added some links to where people could go to learn more about organisations working to support the health of coral reefs both around Indonesia and more widely.

It was fun working with geographic data and something I’d like to do more of in the future, especially given the new vector maps in Tableau and the new spatial functions. I’m glad I was able to make this late entry to #IronQuest and I hope I’ll be able to make more in the future.

Click the image below to load the visualisation on Tableau Public:

Thanks for reading,
Marc

One thought on “Coral Reefs of Indonesia”